A very warm 22c in Chepstow today which gave me hope for an a reasonable return on the the moth trap this evening. A planned visit to a regular spot Wentwood was scuppered as I rolled up to the gated entrance, only to find another major phase of tree felling was taking place. Another trap-site just down the road I visit occasionally yet again was to be struck off, as several members of the public were parked where I normally go. So, finally a 3rd choice destination at Cuhere Wood was to be the the set up location as darkness started to take hold. I have visited here only once before, again in the month of March, so I expected to see roughly the same species. This site does not really allow for big numbers of moths I feel due to very limited accessibility so expectations were not too high. None the less, it is valuable for adding to the grand scheme of things. 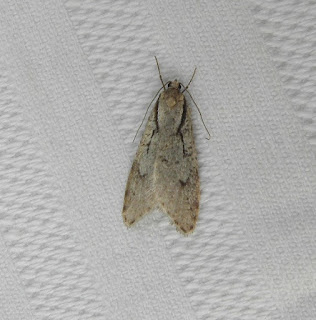 As with a lot of evenings lately temperatures tended to fall away quite quickly but this evening was not too bad with some cloud cover helping stabilise things to a degree (no pun intended). 27 moths of 12 species turned up with a brightly marked Water Carpet and Brindled Beauties'. March moth was tops with 5, but I was surprised not to have found a Clouded Drab. Only one micro turned up and it was a very good one, a Semioscopis avellanella. This was a third locational site that I've encountered it with this one being the most westerly so far. Given I've gone out to several woods with favourable habitat through March over the years, I do find it strange that I have not brought in more records of this species. Looking back over my records this sighting was 4 years in the waiting, with 2016 and 2017 the other records close to Chepstow.