After daytime searching at Fedw Pool in very hot conditions, I decided the evening would be worth setting a trap up at Slade Wood, Highmoor Hill. The evening was worth exploring here and although I had encountered many of the species before it was indeed good to know many were still happily existing in this wood after many of the trees had been removed over large expanses previously. Nature though always finds a way to survive I guess and I'm sure many deciduous trees would quickly fill in the gaps in the coming years. 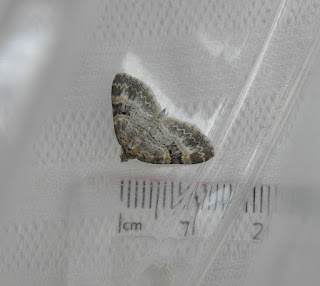 A total of 77 moths of 39 species were spotted while I was there, with 10 'localised' moth species including; Scorched Carpet, Scorched Wing, Cream Wave, Small Seraphim (picture above), Least Black Arches, Coronet, Orange Footman and Maiden's Blush on the 'Macro' front. 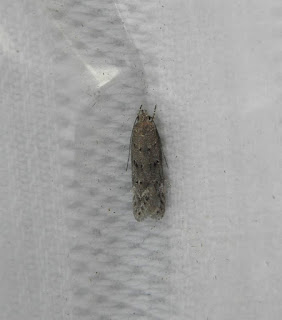 Two 'localised' micro's were spotted those being Exoteleia dodecella (Pine Groundling) (pictured above) and Bucculatrix demaryella (Birch Bent-wing) (pictured below). Thankfully there are still some Pine trees developing here for the E. dodecella to continue it's existence in this area. 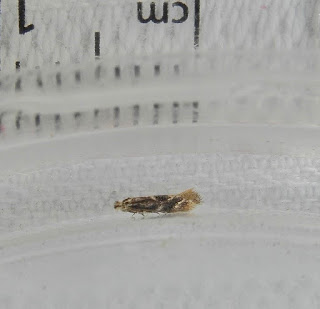 It was particularly nice to have found an adult B. demaryella after I had spotted a mine here in 2017 to back up it's presence and George Tordoff's record. Apparently it also uses Hazel and Sweet Chestnut leaves including Birch in larval form too. There were 6 records of this moth prior to this one with equal amounts of sightings, 3 Adult and and 3 Leaf-mines. This was my first as an adult, however it seems quite hard to discover this micro in any form at the moment given the records situation.
Posted by Nick Felstead at 11:44