Langmaid's Yellow Underwing (Noctua janthina) was separated from Lesser Broad-bordered Yellow Underwing (Noctua janthe) in 1991 and was recorded new to Britain (by John Langmaid, hence the name) shortly afterwards. Initially it appeared to be an occasional migrant/vagrant to Britain, but in the last 15 years it has been seen annually in many parts of south-east England and is clearly resident. The first Welsh records came from Montgomeryshire in 2009 but very few have followed. I have been aware of its likely appearance at Dingestow for several years, but checking the hindwings of Lesser Broad-bordered Yellow Underwing for the characteristically extensive black border of Langmaid's is very difficult on live specimens. 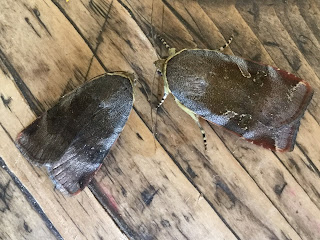 The Dingestow Court MV trap on 21st-22nd July 2021 held three Noctua: one of which (the left hand individual in the photo above) appeared significantly shorter- and broader-winged than the other two. Crucially the shorter-winged one appeared to have very little yellow on the hindwing. Failed attempts to photograph its hindwing when it was alive eventually resulted in it escaping in my kitchen and vanishing for several hours. Luckily it was relocated, allowing conclusive examination of the male specimen showing it to be Monmouthshire's first (confirmed) Langmaid's Yellow Underwing. 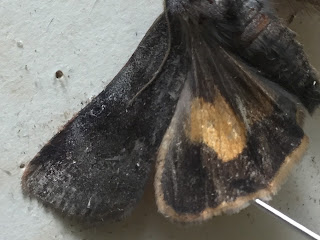