Potentially a slightly milder evening forecast tonight than of late, so wanted to venture out to new unvisited sites at this time of year on higher ground to see what moths might operate there.

On my trip around I visited Cleddon Bog, Ninewells Wood, and Bargain Wood which all range over 200 metres above sea-level.
All sites contained Winter Moth albeit in low numbers. Bargain Wood had one Chestnut Moth found on bramble, whilst at Ninewells Wood I had more of a headache trying to work out what a tiny moth was, after luckily discovering it on the roof of my car. 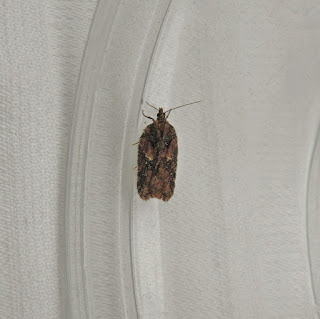 My first thoughts were, it could be a Oak Nycteoline as they are variable, but I could not match it for markings at all. Next I looked at the Acleris group of micro's of which A. hastiana would surely be a contender, as it again is variable in markings. This again proved an unlikely match.
Whilst flicking back through my guide book once again, another moth then struck me as being a possibility in the form of Acleris albietana. This seemed a bit far fetched though, as associated maps had it based in northern England and Scotland.
After further head scratching I decided to take it back and investigate at daybreak to shed.... 'literally' more light on it.
More photographs taken in the morning and a forward e-mail to Sam Bosanquet, then had us both agreeing that the Scarce A listed Acleris albietana was a likely candidate.
Further correspondence to George Tordoff and David Slade via e-mail made sure that it was indeed this species along with the added status of it being not just being new to Vice County 35 Monmouthshire, but also completely new to the Principality of Wales. 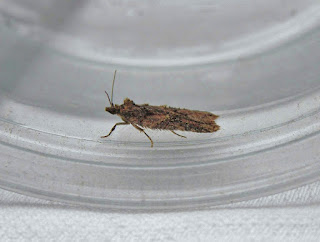 Looking closely above, some of the many scale tufts that adorned the forewings of this micro.

A brief history of the moth shows it has spread south from it's original founding county of  Perthshire in Scotland (c.1965) right down through Britain to the south.
Relatively close by Vice counties of Worcestershire and Herefordshire encountered it in 2011, whilst more recent sightings have appeared Gloucestershire and even Devon.
Given timings and its rapid spread recently, I suspect it may well have arrived here much earlier in the county and just be lurking in a coniferous wooded area, awaiting discovery.