A fairly newish site I've started to try out was visited tonight at the edge of Glyn Wood. A breezy afternoon saw winds diminish by the time the light was fading and my arrival here. A mostly clear night enfolded however showers did encroach affecting the site towards the end of my stay and this prompted me to pack up for moth activity had nearly stopped. 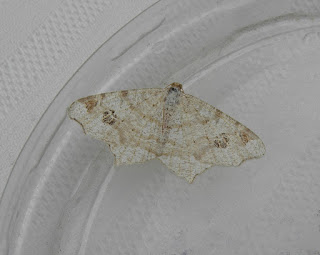 Not had a great return of moths here before and I suppose the same was of tonight with 54 moths of 31 species turning out. Still quantity does not equal quality and this should applied tonight for some species were not expected or ever seen by me before. The coming and going of Peach Blossom moths kept my attention to the trap tonight. A Buff Footman, Black Arches and an immigrant Dark Sword-grass dropped in before the surprise macro of the night arrived in the form of a Peacock Moth. I don't recollect it ever being recorded whilst I've been on watch within this woodland complex before, so very welcome indeed.

Micro's were rather interesting too, in fact more so. 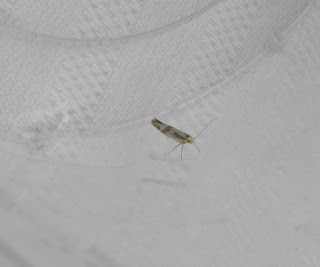 Two types of Argyresthia were recorded. The first one Argyresthia bonnetella is common but caution apparently should be applied on the angle of markings on the forewing to differentiate from A. pruniella. The other species of Argyresthia that arrived was completely new to me and apparently a much rarer find. Argyresthia semitestacella is an uncommon find in the county although it's foodplant Beech, is fairly widespread. It is one of the larger of this group and flies later than most although care should be applied in identification to the white band that runs down the back. Sam Bosanquet was particularly pleased that quality of the photograph that showed the 'bands' on the cilia which can be an additional aid to identification. Thank you Sam. 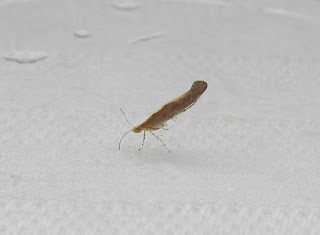 Still after this pleasing find what more could better or equal this?

An unidentified greyish looking Anacampsis waited for an ID. This is a moth I really have wanted to get to the bottom of in respect of identification. Over the last few years or so I have encountered this guy infrequently but never could actually be precise as to which was present: Anacampsis blattariella or Anacampsis populella. Identification purposes were generally applied to which foodplant was in the vicinity previously. Given I came into contact with Birch trees virtually all the time A. blattariella agg. was favourite and applied with a slight air of caution. Poplar trees -which Anacampsis populella relies on- although not uncommon, were not anywhere to be found around my trap site position for a considerable distance if at all. 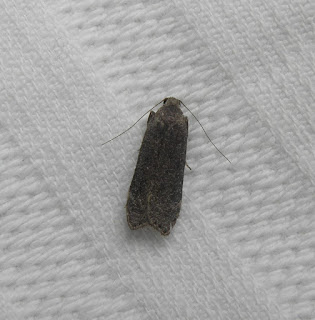 So when I sent this specimen off to Sam for identification purposes it came as a shock to me when he told me I had found a male Ancampsis populella. This is the first confirmed record by Gen. Det. to have been done in the county and throws a bit of a spanner in the works. I don't know where its foodplant is? I will be trying to find it later this year to tie things up, but like many moths they do wander from time to time I suppose. A very pleasing and perplexing record regarding the foodplant at the moment.