A wet evening, but productive

Kept watching the forecast for this evening as some rain showers were scattered around. Was keen to go out so took the risk. It appeared that they would avoid Chepstow for sure but it was ever changing  and I wanted to go more to the north to Ravensnest Wood which may place me under more risk.
Decided I'm going and packed the umbrella. A good start regarding no rain, although moths were slow to arrive on site. 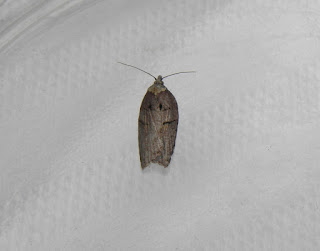 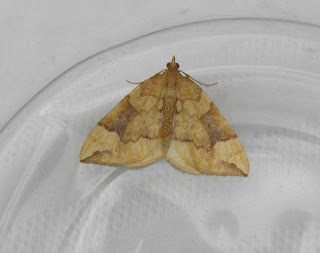 Although slow it was good, as I had already collected Acleris Hastiana which I was pleased about before my first ever sighting of a Northern Spinach.
Soon though a light shower arrived followed by a more prolonged spell lasting about 40 minutes or so. It got a bit heavy at one point so I retired to my vehicle, placing the brolly over the trap.
A let up in the rain eventually prompted me to have a look at what was happening and duly I found a very nice male Gold Swift originally in very good condition, however he had turned over and had gotten stuck slightly with regards to his wing on the wet ground sheet. To my advantage perhaps he was still here, nether the less wing markings were intact despite damp, so I placed him out the rain for now to dry out. It follows up a sighting I made about a year ago in the same wood of a female further down towards the Angiddy river section of this wood. 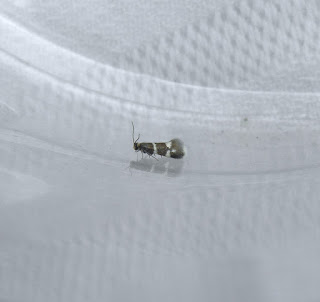 Although not a huge amount of moths followed on after, there were two more exciting notables for me tonight.
The rain had stopped but you would not have thought so with the breeze disturbing branches and shedding their drops of rain onto the ground sheet and trap. Eventually all went quite so I peered underneath the umbrella only to spot a nice, tiny, micro. This looked interesting and would have to be investigated further back home. The outcome after photographs and a look-up, was a completely new moth to me in the form of Phylloporia bistrigella (Striped Leaf-cutter) which apparently likes Birch. 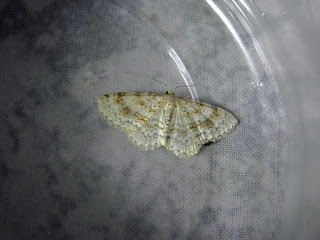 Several more moths arrived later but it seemed quiet, so was about to pack up when this fabulous Waved Carpet turned up. I have only seen it a few times before and took me by surprise but made up for the effort battling against the weather this evening.
Posted by Nick Felstead at 01:22