Have been out there in the wilds trapping for a few years now but never surprisingly, encountered an Early Moth anywhere, until now. The main reason I think is I don't trap near to hedgerows where it's foodplant Blackthorn and Hawthorn are.
Still, It's a little odd how things transpire... where you don't see certain moths for years and then you have a running sequence where they turn up anywhere and everywhere. So, I've now come up with 3 sites over the last 3 weeks on the current run. 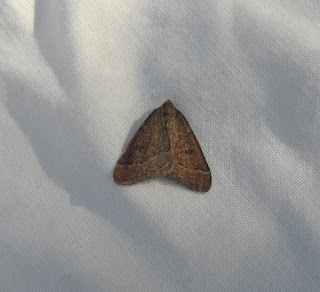 My first sighting was on January 18th by pure chance in the daytime whilst using a subway near to the village of Caerwent. One was seen close to a light on the wall. I've revisited here three times and each time Early Moth was present peaking at 3 on the 26th January. Mainly hedgerows around here.

The next site was again backing onto hedgerows. On the 5th February early Moth was found this time resting up in a gatehouse during the day at Llandevenny presumably attracted to the night-time spotlights.

The third location was at Glyn Wood, Chapel Hill late at night, just before midnight.
This actually arrived at the light-trap for a change.
It's quite open here so I guessing it may have got blown in from nearby hedges by accident as I don't recall Blackthorn or Hawthorn at site.